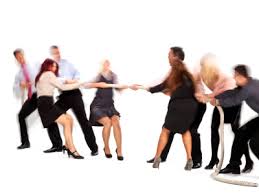 Who gets custody of your friends after a divorce?

Dividing everything up in a divorce is a gruesome business no matter how amicable or reasonable or relieved you are. It’s like watching yourself have surgery. Everything that ever mattered, every element of your existence is pulled out, shuffled around, placed on the table for you and your ex and your lawyers or whomever to paw through.

First you officially dispense with the inner-ring: kids, house, all the crap in the house, something called assets (wish I had some of those) and the pets. Then there’s this weird outer layer of life that’s harder to quantify but often requires some cold, calculated divorce math. For example, what do you do with your friends?

In certain ways, some friends are treated like possessions. If your grandmother gave you her pearl earrings when you were 16, well before your marriage, those remain yours. If your ex’s father gave him a suped-up Mustang when he was in college, that horse is all his. Same deal with FBMs. Those are your Friends Before Marriage. They all automatically transfer to their side of origin, no paperwork necessary.

Then there’s the grey area of FOWM (Friends Obtained While Married). Here’s where things can get hairy. If you two met in college and have a crew from back then, it’s tricky. Gender tends to be the deciding factor. Girls team. Boys team.

My ex and I had it easy because:

a) we only shared two marital friends and we easily divided them by gender;

b) I was moving 2,000 miles away and was in such a grief-filled fog over my brother’s death I didn’t really remember anybody or anything and just wanted to get home and never, ever look back;

c) we struggled to make friends as a couple, which was one of the many ways our separate lives were reflected in our marriage.

However, I know a lot of folks whose entire social circle was deeply intertwined with their married life and extricating one from the other was excruciating and complicated.

He got the boy. She got the girl.

I know a couple who actually wrote into their ‘parenting plan’ the names of two friends they wanted to claim separately. I wish I could get the exact wording they used. But I do know he got the boy and she got the girl and it was somehow officially sanctioned in their binding agreement. Luckily the couple they wanted to share later split up so happy ending for everybody.

But how do you divvy up friendships made, sometimes over decades, after the divorce?

Friendships already on the brink may split after your split

One of the things I’ve heard a lot is that the continental shift of a marital split causes retrenchments in friendships that were already on shaky ground. It’s a great excuse to get out of a toxic relationship or a friendship you’ve been trying to ditch for a while. Or, if you’re on the receiving end, it’s a great way to see who, as they say, your real friends are. How it all shakes out after a divorce is a good indicator of how it all would have ended anyway.

If you two are able to have decent conversations I think this is a great arena for discussion. I’m closer to Barbie, you’ve always liked Ken, so how about if we just say hands off the other one’s pal.

Why do you have to choose, you ask? For purely social acquaintances, you don’t. Lunch here, coffee there, you can share. I’m talking about the real-deal friends, the ones you want to tell the whole story to; the ones you want to be able to vent and rage and gossip and say your ugliest thoughts and feelings to out loud. For that, you need a person you know is not having those same conversations with your ex. And your ex needs that same insulation. It’s basic physics. You must choose and sever all ties.

Exception to the rule

Now, if somebody goes off the deep end and does something supremely stupid, well then all bets are off. All friends are then honor-bound to take the side of the spouse who was done wrong and to make the life of the wrong-doer a living hell from here to eternity. All of this assumes both parties are reasonable and simpy should not be married anymore. If somebody cheats or embezzles or commits any other betrayal, deal’s off. No more friends. You are bad and will pay.

As with everything else in divorce, it’s always best to:

c) write everything down in painfully clear, binding detail so nothing is up for interpretation or argument

d) have the plan approved by a mutually-agreed upon, non-biased third party

Some friends will dump you

This all assumes you have a choice in the matter. After divorce, some friends will dump you with a bang, or vanish with a whimper. Either way, it’s something that just happens. Divorce triggers all kinds of primal feelings and reactions from married friends: sympathy (how will she make it on her own?); envy (how did he finally get out?); curiosity (what made them do it? They had better sex than we do!); panic (is it contagious? Will he leave me now that his best friend dumped his wife?)

As a married person you immediately compare and contrast: What would you do if your spouse left you, you wonder. When friends split up, it forces you to fully confront often lurking feelings of ambivalence or worse. Are you unhappy? What would it be like to have a chance to start again? If you weren’t bound by children and financial constraints would you still be together? Oh the sex they might get to have…All marriages have weak spots and there’s nothing like an old friend with a new bachelor pad to bring those spots to the forefront.

Divorce is dangerous to married folk

Divorce and the new lives (or at least the possibility of new lives it may offer) can be dangerous to married people. As vulnerable as you feel being newly divorced, as scary and uncharted as your new life feels, your married friends have their own set of fears that may get acted out.

No matter what, the divorce-quake will reshuffle your life in ways you never would have predicted. What’s most important is that you have a devoted team of friends on your side to help you through.